It Gave Him A Special Place 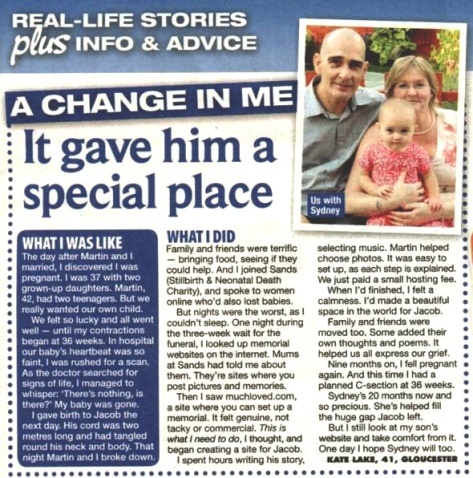 The day after Martin and I married, I discovered I was pregnant. I was 37 with two grown-up daughters. Martin, 42, had two teenagers. But we really wanted our own child.

We felt so lucky and all went well – until my contractions began at 36 weeks. In hospital our baby’s heartbeat was so faint, I was rushed for a scan. As the doctor searched for signs of life, I managed to whisper: ‘There’s nothing, is there?’ My baby was gone.

I gave birth to Jacob the next day. His cord was two metres long and had tangled round his neck and body. That night Martin and I broke down.

Family and friends were terrific – bringing food, seeing if they could help. And I joined Sands (Stillbirth & Neonatal Death Charity), and spoke to women online who’d also lost babies.

But nights were the worst, as I couldn’t sleep. One night during the three-week wait for the funeral I looked up memorial websites on the internet. Mums at Sands had told me about them. They’re sites where you post pictures and memories.

Then I saw muchloved.com, a site where you can set up a memorial. It felt genuine, not tacky or commercial. This is what I need to do, I thought, and began creating a site for Jacob.

I spent hours writing his story, selecting music. Martin helped choose photos. It was so easy to set up, as each step is explained. We just paid a small hosting fee.

When i’d finished, I felt a calmness. I’d made a beautiful space in the world for Jacob.

Family and friends were moved too. Some added their own thoughts and poems. It helped us all express our grief.

Nine months on, I fell pregnant again. And this time I had a planned C-section at 36 weeks.

But I still look at my son’s website and take comfort from it. One day I hope Sydney will too.