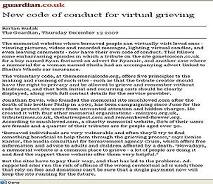 The memorial websites where bereaved people can virtually visit loved ones – viewing pictures, videos and recorded messages, lighting virtual candles, and even leaving comments – now have their own code of conduct. This follows some embarrassing episodes in which a tribute on the site gonetoosoon.co.uk for a boy named Ryan featured an advert for Ryanair, and another case where a memorial for a woman named Sheila had an accompanying advert linked to Sheila’s Wheels car insurance.

The voluntary code, at thememorialcode.org, offers five principles to the making and running of such sites – such as that the tribute creator should have the right to privacy and be allowed to grieve and remember without hindrance, and that both initial and recurring costs should be clearly displayed, along with full contact details for the service provider.

Jonathan Davis, who founded the memorial site muchloved.com after the death of his brother Philip in 1995, has been campaigning since June for the code to protect site users from unwanted attention and hidden charges. He created it with four other memorial organisations – missyou.org.uk, tributetimes.co.uk, thelastrespect.com and remembered-forever.org. According to muchloved.com, a charity memorial website, 80% of their users are female and a quarter of their tributes are for people aged over 50.

“Bereaved individuals are very vulnerable and often they’ll try to find something beneficial to help them through the grieving process,” says Denise Kantor, the media consultant for bereavement agency Cruse, which offers free information and advice to adults and children affected by a death. “Nowadays, a memorial website is a common place to grieve – a lot of people are doing it and find the support these websites offer them very helpful.”

But the sites have to pay their way, and that has led to the problems. Ad-supported sites run the risk of offence if the wrong contextual ad is used; those that rely on fees and donations can’t be sure that a single payment now will keep the site running for the future.

“People who grieve online are often leaving themselves open to abuse from strangers and companies that are hoping to cash in on the bereaved,” says Sophia Dixon, who deleted a tribute to her mother Gladys on gonetoosoon.co.uk after the advertising controversy. “I tried contacting the site organisers but they don’t supply an email address, only a phone number which costs £1 per minute”.