The dot.commemoration generation: Meet the women who created websites to cope with their loss 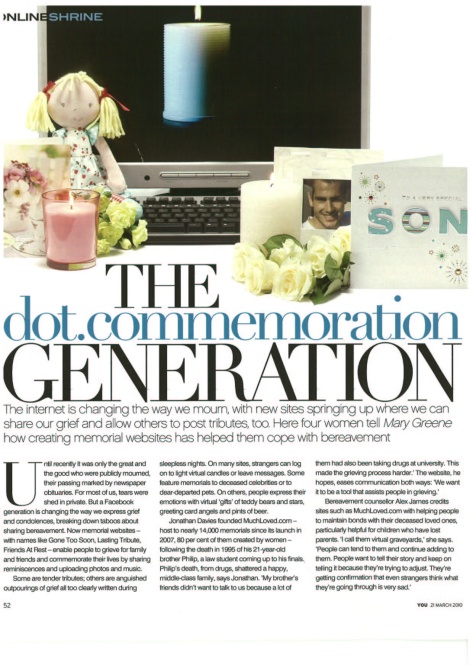 The internet is changing the way we mourn, with new sites springing up where we can share our grief and allow others to post tributes, too. Here four women tell Mary Greene how creating memorial websites has helped them with bereavement.

Until recently it was only the great and the good who were publicly mourned, their passing marked by newspaper obituaries. For most of us, tears were shed in private. But a Facebook generation is changing the way we express grief and condolences, breaking down taboos about sharing bereavement. Now memorial websites – with names like Gone Too Soon, Lasting Tribute, Friends At Rest – enable people to grieve for family and friends and commemorate their lives by sharing reminiscences and uploading photos and music.

Some are tender tributes; others are anguished outpourings of grief all too clearly written during sleepless nights. On many sites, strangers can log on to light virtual candles or leave messages. Some feature memorials to deceased celebrities or to dear-departed pets. On others, people express their emotions with virtual ‘gifts’ of teddy bears and stars, greeting card angels and pints of beer.

Jonathan Davies founded MuchLoved.com – host to nearly 14,000 memorials since its launch in 2007, 80 per cent of them created by women – following the death in 1995 of his 21-year-old brother Philip, a law student coming up to his finals. Philip’s death, from drugs, shattered a happy, middle-class family, says Jonathan. ‘My brother’s friends didn’t want to talk to us because a lot of them had also been taking drugs at university. This made the grieving process harder.’ The website, he hopes, eases communication both ways: ‘We want it to be a tool that assists people in grieving.’

Bereavement counsellor Alex James credits sites such as MuchLoved.com with helping people to maintain bonds with their deceased loved ones, particularly helpful for children who have lost parents. ‘I call them virtual graveyards,’ she says. ‘People can tend to them and continue adding to them. People want to tell their story and keep on telling it because they’re trying to adjust. They’re getting confirmation that even strangers think what they’re going through is very sad.’

Tribute to a lost son

Christina Ford, 52, from Bexley, Kent, created a memorial to her son Adam Hunt, 19, who died on the Greek island of Zante in July, 2007, aged 19. A local government PA, she is married to Adam’s stepfather Ian, a corporate sales manager, and has a younger son Marcus, now 18, and a grown-up daughter Melanie.

Adam had enjoyed school, but he was floundering about what he wanted to do next. He got a bit depressed, but he was laughing and positive again when he left for a working holiday in Greece with a friend. We had phone calls and texts and he seemed to be having a fantastic time.

We don’t really know what happened, but it seems that in Greece he had a mental breakdown. One day he ran into the sea and just swam and swam. When his friends realised he wasn’t going to stop, they went in after him…but he drowned.

Apart from the terrible grief, you feel guilt – that you’re a failure as a mother. You think, ‘How did I miss what was happening to my child?’

His friends started writing about how they felt on a Facebook memorial; I was glad they had somewhere they could write without feeling embarrassed – jokey things, hoping that Adam’s partying with the angels. That’s lovely, because he would be. They’re young people, not used to death.

Three months to the day that Adam died I started my own tribute on MuchLoved.com. Because it’s so wrong to lose a child, you just want people to know about him. He was a sweet child; when he was three, he was the first boy on the Fairy Liquid ads.

To me it’s like a little notebook where I can remember something funny or sad. It’s just another tool you can use, a way of making us feel that he’s still with us. Maybe 20 years ago I’d have kept a diary. But you can visit a website wherever you are in the world. My daughter lives in Spain and Adam’s friends are all at university or travelling; this way everybody can be involved, so it’s not just his mum extolling his virtues. I know that Adam can’t read a website in heaven – but I do feel that it’s a connection. I visit his grave every week, if only for five minutes to leave fresh flowers. But I don’t sit there; it’s not a comfortable place.

I don’t write everything I feel. I haven’t written about Adam’s funeral and maybe I never will; it was so traumatic, and it would be too painful, I think, to see it every time I log on. I still haven’t been able to write about the celebration we had for what would have been his 21st birthday. It was such an emotional day: everybody was crying as we let off 21 balloons carrying messages. Adam’s friends have been incredible. They’re amazing young people. I couldn’t manage without them.

I like writing, and the memorial is a labour of love that I want to continue writing for as long as I live; I don’t want Adam forgotten. I do think it has helped me. How can we ever accept that our lovely boy lost his mind and we just don’t know why? But whenever you click on the website, there he is, smiling and happy. It isn’t about how he died, but how he lived. It’s a positive thing. You feel that your child’s life needs telling. I find it comforting to think that people who would never have crossed Adam’s path in reality will know about him. He’s still reaching people and still touching their hearts.

It’s pure love – every one of these websites is made with love.